Fringe First at the Allotment 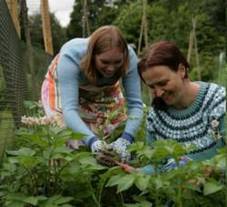 Congratulations to Kate Nelson and everyone at Nutshell for their Fringe First award.The Scotsman's Fringe First awards remain the most prestigious and sought-after theatre awards at the Edinburgh Festival, recognised all over the world. The awards recognise outstanding new writing premiered at the Fringe. Well over 500 shows were considered eligible for the awards this year and our very own ALLOTMENT won one.

This Assembly show is performed in the Inverleith Allotments off East Fettes Avenue, where we’re handed a cup of tea and a scone, and invited to spend 45 minutes in the company of sisters Dora and Maddy, who have lived their whole lives in a nearby house. “It is remarkable how much ground is covered by a short play,”

“Within its own boundaries, it’s charming, thoughtful and digs deep.”